George Venn is a songster. His prose may not be “singing,” but, as his title might signal, everywhere in this swarming of memories Venn is buzzing about song. At one point he wonders, amid a cluster of rhetorical questions, where the songs that speak to the places and problems of his mostly small-town, working corners of Oregon, Washington, and Idaho might be hiding. The people there, his people, need their own songs to connect themselves, to recognize their “relation to self, community, and cosmos” (81).

Hence his revelation, and maybe his manifesto: “To thrive,” he asserts, “communities . . . must follow their discontent to discovery, invention, and improvisation” (81). He tracks this hopeful directive in a set of essays (many collected and revised from earlier printings) musing on the imported songs of his growing up and the folk songs that have become his adult passion.

I may be especially alert to the motif, given that “Bordersongs” is the title and theme of the wla’s 2014 conference I am organizing with Anne Kaufman, but song seems to hum everywhere in Venn’s reflections. He uses “Good King Wenceslas”—relocated to the Pacific Northwest—to define and redefine a place remote from tenth-century Bohemia (35–36). He tells of singing “The More We Get Together” as a visitor to China looking for acceptance (185). Most memorably he writes of the Native American Upper Skagit peoples, who were willing to sing only one of the many Christian hymns they were offered. “Faith of Our Fathers” resonates with a tradition of respect for elders and a long resistance to persecution: “fathers chained in prisons dark / were still in heart and conscience free” (32).

“I’ve given a large part of my professional life,” writes Venn, “trying to reverse the stereotyping, ignorance, and invisibility of northwest literature—the last regional literature in America to be recognized” (109). Followers of Venn’s work will nod enthusiastic agreement, while perhaps also reflecting a little ruefully that he might have integrated more of that literature (beyond folk song) and his readings of it in this collection. But the book does make more visible George Venn himself as Northwest writer, with family biography turning to worker history turning to poem turning to eulogy and in their variations all of a piece. It’s a contribution neatly summed up in Venn’s account of his singing “How Great Thou Art” at his grandfather’s funeral: he sits down after, “trembling from the magic implicit in the commonplace, general nouns of the song—woods, forest, birds, trees, mountain, brook, breeze. . . . Everything my grandfather knew about woods, forests, birds . . . was much more definite . . . much more powerful. . . . But none of that mattered now. . . . It was done in his style—straightforward, steady, competent, self-effacing” (127).
Copyright © 2014 Western Literature Association   Project MUSE® - View Citation MLA
W.A.S Journal Review
The Journal of the Western Apiculture Society of North America
February 2013 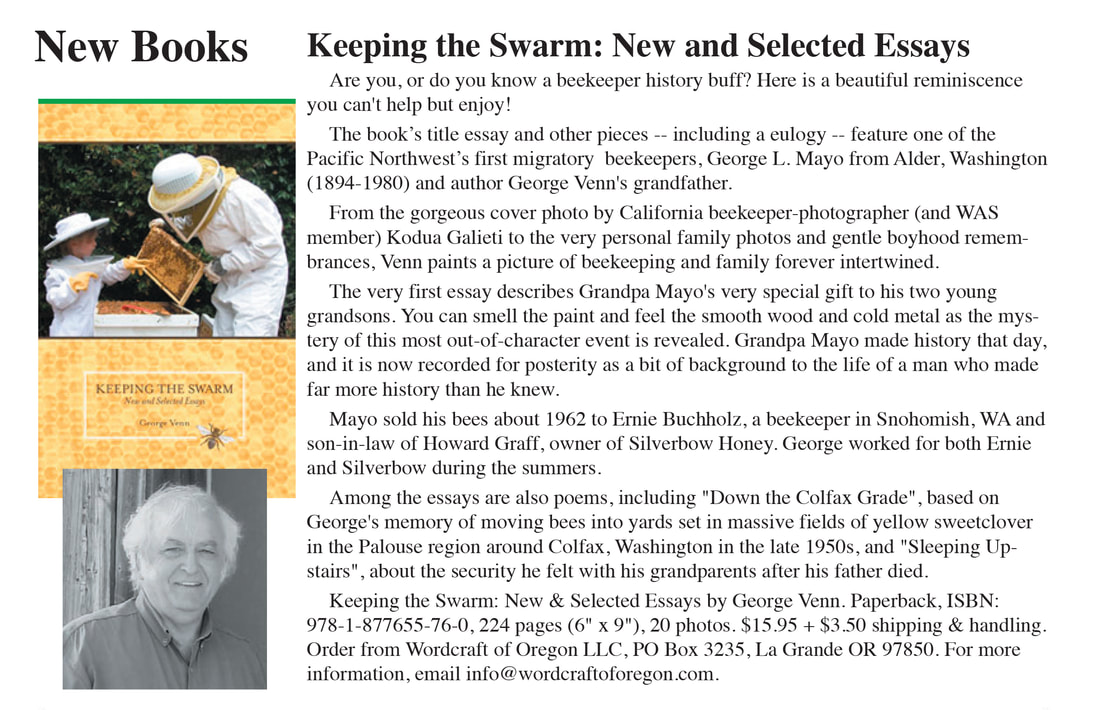 Venn is the bard of La Grande, a longtime teacher at Eastern Oregon University who retired in 2002 and has continued to walk the writer's walk with poetry, historical monographs and now "Keeping the Swarm: New and Selected Essays." The collection is personal and universal, grounded in the small towns of the inland Northwest that Venn knows so well -- Burlington and Puyallup, Wash., Spirit Lake, Idaho, and of course La Grande. There are memories of family and friends long gone, of experiences that shaped a young poet's path, and of trips to Spain and China that were formative in other ways. Wordcraft of Oregon published this fine collection and included photos from Venn's collection.
"In his latest collection of essays, Keeping the Swarm, Venn again reflects his strong ties to and affection for the Pacific Northwest...Intensely personal and intimate, these essays reflect a thoughtful nostalgia and gentle sensibility...Venn offers many memorable moments."
—Kirsten Rabe, ForeWord Reviews, Winter 2012
HELP FUND A FULL DOCUMENTARY!