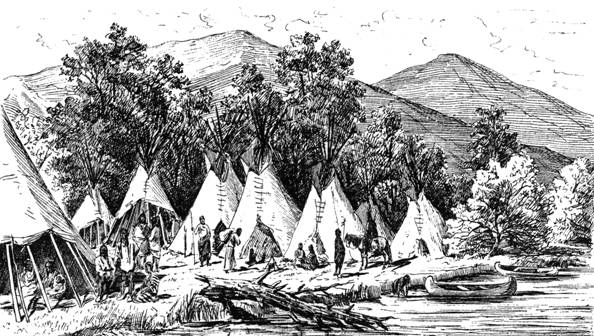 “Captives of Joseph’s Band Coming Into Miles’ Camp.” C.E.S. Wood, New York Daily Graphic, Nov. 3, 1877.
Bolstered throughout by nearly two hundred notes, Part IV concludes the story in the 1990's with eleven unpublished original photos. Accompanied by a rich narrative, these photos document three events in the Wood family’s legacy of friendship and respect for the Nez Perces: a Nez Perce – C.E.S. Wood exhibition, their gift of a stallion to Chief Joseph’s descendents, and both families’ participation in the Red Heart Memorial Ceremony at Fort Vancouver.

In Soldier to Advocate, Wood shows us all, to paraphrase James Joyce, that history is the nightmare from which we should always try to awake.
PRE-PUBLICATION REVIEWS

"I highly recommend that any serious student of the Nez Perce Campaign read this excellent and rich piece of work... "

"George Venn's work is a superb contribution to our knowledge of the Nez Perce War... "

"Thank you for that wonderful publication, Soldier To Advocate. It's rich, rich, rich, and I congratulate you."

—Alvin Josephy, author of The Nez Perce Indians and the Opening of the Pacific Northwest

"In this carefully researched, richly illustrated presentation of Lieutenant C. E. S. Wood’s Nez Perce War diary, George Venn offers readers a compelling introduction to a most unusual army officer. Wood appeals to us because of his modern sensibilities, compassion for the enemy, and generosity of spirit. His diary demonstrates the terrible cost of war. His life represents the potential for redemption. Wood experienced the dark side of conquest and tried to make amends—a legacy his descendants carry on today."